Lana Turner said the role she most enjoyed playing was Cora in THE POSTMAN ALWAYS RINGS TWICE.

Merle Oberon said she had the most fun making THAT UNCERTAIN FEELING for Ernst Lubitsch. 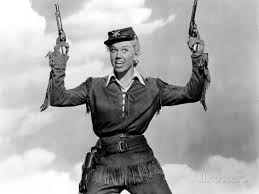 This ever happen to you? It happened to me today. I was watching GARDEN OF EVIL, starring Susan Hayward and Gary Cooper, and I looked up user reviews on the IMDb. While I was reading others’ comments, I realized just how many plot holes and shortcomings the picture has. What I might have rated a 9 out of 10 before suddenly slipped to a 7.

It makes me wonder if we tend to gloss over classics the first time we see them, because we are happy to see our favorite stars and excellent studio production values. But then, as we step back and look closely, we begin to see all the flaws and the fact that some films today are made much better than these “masterpieces…”

In the case of GARDEN OF EVIL, after I read some reviews and comments under the message board for the film’s page on the IMDb, I realized that it suffers from a lack of close-ups (the focus is on exploiting the CinemaScope process), so we never get to intimately know the characters. It is definitely cliched in spots (men greedy for gold), and the natives (Apaches) are not costumed correctly and seem to resemble Iroquois. Then we have Hayward’s character getting over her husband too easily so she can take up with Gary Cooper and thus provide a happy ending. Plus I discovered a key scene early in the picture had been cut, and it does cause a continuity problem. As I thought about these issues, I realized that the film is not as perfect as I once believed it to be.