TB: I have to admit that I enjoyed this film a bit more than the previous ones. And I suspect it’s because the filmmaker is borrowing from a story by Hans Christian Anderson which is vividly defined with memorable characters. So even an amateur wouldn’t be able to mess this one up too much!

It also benefits from a smart framing sequence, though I wouldn’t have minded if the framing sequence became a subplot and we had occasionally cut back to the boy taking little breaks or pauses from the main story, so we could learn more about his life. I know he’s supposed to be dreaming much of this, but instead of having him asleep, he could be daydreaming it.

Anyway, it could have been expanded. I agree with Jlewis’ comments below that the scenes unfold a bit slowly but I like more leisurely paced films and this aspect didn’t trouble me like it did some reviewers on the IMDb. Jlewis also comments about the stereotypes, and you really cannot deny the film is loaded with Asian stereotypes. One has to wonder why eastern Europeans would be interested in an Asian-themed story and not a story about their own specific culture.

Meanwhile there is a voice-over narration by Boris Karloff which to be honest, I disliked. Around the 12-minute mark, I muted the sound and watched the rest of it in silence. The visuals do not need Karloff’s highly intrusive narration, spelling out the action for us. Narrating should have been kept to a minimum. Let the story speak for itself.

My favorite sequence is the one where the emperor marches along a wall that is decorated like a huge lace doily, with holes forming windows through which the emperor’s courtiers watch. It’s an inspired visual and felt like something that could be replicated on stage if this were turned into a stage production. I also liked the amusing scene with chopsticks, which Jlewis details below.

In some ways, the story is about stepping outside your comfort zone and seeing what the rest of the world has to offer. It contains a simple magnificent message.

JL: CÍSARUV SLAVÍK a.k.a. THE EMPEROR’S NIGHTINGALE may not “wow” first time viewers in quite the same way as LE ROMAN DE RENARD a.k.a. TALE OF A FOX since the puppets animated here don’t display a lot of facial expressions and there is no talk. The story also moves at a much slower pace and is much more basic with hardly any drama and cut-throat action. It is just a simple adaptation of Hans Christian Andersen’s popular fairy tale (1843 publication), done in animation before numerous times, that adds the additional side-story about a lonely little Czech boy (played in live-action sequences by Jaromir Sobotoa, with Helena Patockova as his girl interest) who sees himself as no different than an ancient Chinese emperor.

Both are restricted to a confined life full of rules and rituals and needing an outlet. In the emperor’s case, relief comes in the form of a singing nightingale who livens up his humdrum existence. That is, until he is distracted by a robotic mechanical bird that is given to him as a gift: its theme within a theme relates well to our modern society that is constantly distracted by new technical “toys” and often overuse them until they wear out.

If you are a Baby Boomer or Generation X-er who remembers entertainment before home video, you may remember seeing this particular title in school during the sixties or seventies on a 16mm motion picture projector, often in rotation with other popular films like Albert Lamorisse’s THE RED BALLOON, Robert Enrico’s AN OCCURRENCE AT OWL CREEK BRIDGE and the Disney cartoon educational DONALD IN MATHMAGICLAND.

At the time, there was still some novelty in seeing a stop-motion puppets move about because the classic George Pal’s Puppetoons were largely inaccessible (due to the Jasper controversy) and primarily the Rankin-Bass holiday specials on TV were the major alternative at the time, along with the occasional Ray Harryhausen effects enhanced live-action fantasy that would appear in theaters. Today, you can see all the old-time pre-CGI stop-motion you want on YouTube.

The decades between the 1940s and ’80s were, in fact, a golden age for stop-motion puppet films despite limited viewing availability in the U.S. Quite a large number were made by Prague’s great Bratri v Triku (“The Brothers of Tricks”) studio which produced this title, followed in the fifties by East Germany’s DEFA and the mighty Soyuzmultfilm of Moscow, adding to its already prolific schedule of cel-animated Disney knock-offs. Japan also had quite a few to contribute (i.e. the Rankin-Bass U.S. co-productions were mostly produced there), since its culture was equally puppet-oriented (unlike the United States). Despite the popularity on Soviet TV of puppet star Cheburashka, a Cold War was still in effect and he did not make inroads into American TV like Japan’s Astro-Boy. 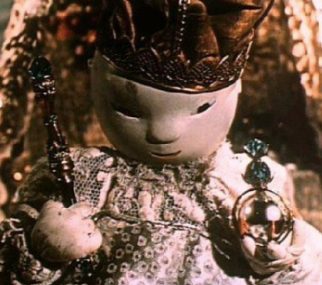 THE EMPEROR’S NIGHTINGALE was among the selected, popular cross-over hits. It was mostly completed in 1948 and released in Czechoslovakia in April 1949, then successfully distributed to U.S. theaters in May 1951 by Rembrandt Films. It received particular praise in the New York Times and other vintage periodicals for Boris Karloff’s delightful narration that was added for the English soundtrack. Although a major screen star, Karloff was equally praised for his excellent work in radio dramas of the era, perfect training for cartoon narration. It was the success of this feature that made him much sought after by cartoon producers like Terrytoons (i.e. THE JUGGLER OF OUR LADY) and Chuck Jones (responsible for the most popular adaptation of Dr. Seuss, HOW THE GRINCH STOLE CHRISTMAS).

Jiří Trnka, the director and primary animator (but with a small team of assistants, Jiří Brdečka and Vítězslav Nezval collaborating on the screenplay and Miloš Makovec getting co-director credit for the live-action scenes), grew up with puppets and made the easy transition to stop-motion after starting out with some cel-animated cartoons initially in 1945, beginning with ZASADIL DĚDEK ŘEPU (GRANDFATHER PLANTED A BEET). ŠPALÍČEK (THE CZECH YEAR, 1947) was both his first puppet film and, at 75 minutes in length, his first feature that directly preceded this one.

He went on to make numerous shorter films in addition to the features, several of which were included in the VHS and DVDs put out by Rembrandt with this film. Most notable was his last major effort, RUKA (THE HAND, 1965), with its pessimistic anti-conformity message that caused quite a bit of censorship trouble with the authorities in power back in its day; a concept not unlike THE EMPEROR’S NIGHTINGALE with its lead character almost dying of suffocation within the confines of his structured existence. Trnka probably felt trapped and confined psychologically during much of his life, both due to poor health (like the little boy in our movie feature here) in addition to the socialist environment he worked in; he was forced to retire earlier than he wanted to and died at the end of 1969 an unhappy man.

Nonetheless, he was widely praised internationally as the “Walt Disney of Eastern Europe” and earned numerous prizes… even an official Hans Christian Andersen medal for illustration a year before his death (since, after all, this movie was his biggest hit). The Bratri v Triku studio he worked at was later renamed after him in his honor.

There are murky copies of this film online, but it is best to find the DVD of the gorgeous Agfacolor print in order to fully appreciate it. Unlike TALE OF A FOX with Władysław Starewicz/Ladislas Starevich, which features very expressive Disney-esque facial movements and dialogue, the characters do not have moving mouths but express emotion from very specific staging for the camera and special lights using different color filters. The puppet used for the emperor is a gray-ish white that reflects warm golden and red hues when he is enthusiastic, blue cast when moody and is presented in stark shadows when sick during the major near-death climax.

Some viewers may object to the slightly “oriental” appearance of the emperor and his royal court (with slanted eyes and pale complexions), but I sense that Trnka and his key animators (Zdnek Hrabé, Jan Karpas, Stanislav Látal, Bretislav Pojar and Bohuslav Srámek) saw little or no distinction between races in different countries other than the cultural ones.

I also sense that the overall designs were intended to emulate the 19th century porcelain figurines in the live-action boy’s bedroom, rather than intentionally try to typecast Chinese in general. Curiously the chamber maid of the royal court, who leads the prime minister to the all important bird in the bamboo forest, is not designed “oriental” but resembles the live-action girl (the one who leads our little boy counterpart to the emperor outside his enclosed mansion) with a freckled face and auburn hair. The European sailor, a clever spoof on Scandinavian explorers, sports a tight mustache and oval face; humor is provided in his struggle to use chopsticks.

One interesting minor character who is (unfortunately) not developed further is the astronomer/scientist whom the royal court questions initially about the nightingale. He is a grizzled all-white figure, a bit too simian-like for modern eyes perhaps, but probably no different than zany eccentric characters featured in other cartoons and kids pictures. He is busy counting all of the stars with his telescope and recording them merely with a star-stamp and ink. No writing! After setting off fireworks for the emperor, he loses his book in a fire accident.

One scene that often makes kids laugh, including myself as a tyke, involves a goofy frog holding a Chinese fan. Why the prime minister would be more curious about him than the bird that the chamber maid is helping him seek is not officially explained, but he reminds me a little of the frog featured in TUBBY THE TUBA, made a year earlier in stop-motion by George Pal in Hollywood. As is sometimes the case, certain characters in these films seem a bit out of place in their story set-ups. Also out of place are the curious cactus shown in one scene, foliage recycled a year later in a western spoof of Trnka’s, ARIE PRAIRIE (SONG OF THE PRAIRIE).

This feature may not be Trnk’a best work but it was his most successful financially and internationally, a good introduction to his twenty year career in animation as one of its great masters. It is also the most kid-friendly. Some like OLD CZECH LEGENDS (STARÉ POVESTI CESKÉ, 1953) are more adult-oriented with a bit more violence and a darker edge to the proceedings. Then again, viewers who think this one is too juvenile for their personal tastes may get a kick out of that one and others. Or not? Hard to tell with many modern viewers accustomed to channel surfing and online surfing. Trnka is more methodical in his story telling and may test a few viewers’ patience, much like the mechanical bird toy playing the same tune over and over for the emperor.

TB: Thanks Jlewis. THE EMPEROR’S NIGHTINGALE may currently be viewed on YouTube.