LE ROMAN DE RENARD a.k.a. TALE OF THE FOX has an interesting history. Now…you will have to forgive me here, but I will be dropping some other title references here and there, as well as some video links… which we generally do NOT do with these essential reviews. It is important that everybody here investigate the animation techniques involved and the creativity involved. What makes this film a particularly exciting essential to study is just how it expands the medium of not just animation, but cinema itself, into unexplored territories not conquered previously.

I will begin with a brief career summary of Władysław Starewicz, who was responsible for some of the earliest animated shorts made in Russia (and practically anywhere in the world since there were only a few experiments before then that you can count on one hand) involving the stop-motion process of moving an inanimate figure frame by frame to create the illusion of motion. His earliest effort in 1910 was LUCANUS CERVUS involving actual stag beetles that were deceased and “reanimated” this way.

Later on, he created more insect puppets, some involving actual insect bodies and others being puppets created from other materials to look like insects and slightly larger in scale. His most popular early effort, shown in theaters all around the world in 1912, was THE CAMERAMAN’S REVENGE (initially titled MEST’ KINEMATOGRAFICHESKOGO OPERATORA).

After doing ten or so of these little films featuring insects and other animal and human puppets, he then moved successfully into directing live-action features as one of the major players in the early booming Russian film industry. His career was cut short in 1918 when many involved in that industry suddenly discovered that they were on the losing side of the Revolution. Eventually he settled in post-war France, changing his name to the easier to pronounced “Ladislas Starevich” and setting up a new studio of his own, dedicated exclusively to puppet films. Initially he operated in Joinville-le-pont, then moved by 1924 to Fontenay-sous-Bois.

With his wife Anna and daughters Irina a.k.a. Irène and Jeane assisting, he had no big team of a hundred employees like Walt Disney in his heyday. The Stareviches were pain staking in their patience and hard work, crafting mini-masterpieces that are still enjoyable today, not to mention quite Disney, Pixar and Studio Ghibli-like in their attention to detail.

With his early Russian experiments, he was several years ahead of American stop-motion pioneers of the U.S., namely Willis O’Brien and Howard S. Moss, and his French films predate the more famous works of George Pal and Ray Harryhausen by a decade or two as well. These newer films focused more on cute dogs, birds, frogs and humans rather than insects and arachnids, although the first of the post-war bunch was IN THE CLAWS OF THE SPIDER a.k.a. DANS LES GRIFFES DE L’ARAIGNÉE, 1920.

After completing LA PETITE PARADE, which I think it was his 13th film in France but can be corrected here, he then passionately devoted two full years to an all-feature length “talkie” adaptation of the popular French and German fables of Reynard the Fox, who outwits other animals in a medieval animal infested “town” and all sporting human clothes. These classic mini-stories go back pretty far in European literature, appearing in pre-Gutenberg paint-and-ink manuscripts dating to the late 1200s. They were popularized by noted writers over the centuries like Willem die Madoc maecte and Goethe.

LE ROMAN DE RENARD was far more complicated than all of his earlier projects due to characters having to express actual dialogue for a soundtrack with mouths in motion to match, not to mention very expansive sets created with puppets to match. As a result, the bulk of production consumed all of his time and energy between the autumn of 1928 through early 1931 with additional tinkering during the next six years as it sat in a sort of limbo. Various technical issues plagued its completion, most notably producer Louis Naplas’ still primitive sound by disc format being utilized at first.

…and a source that Starevich would have to downplay later in his life. UFA, the big German power-house now backed by Nazi money, was interested in making an adaptation of the popular fox fables for German screens and was much impressed by his film. They helped him finish it with a newly recorded German soundtrack. LE ROMAN DE RENARD officially premiered in Berlin on April 1, 1937 as REINECKE FUCHS. This was eight months before Walt Disney’s SNOW WHITE AND THE SEVEN DWARFS, making it one of five animated features predating Disney. 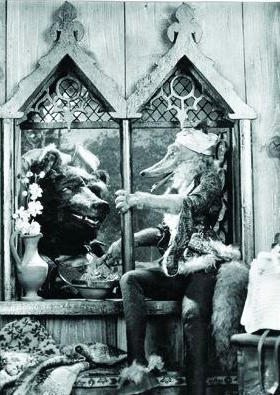 There is some debate as to when the new and improved French soundtrack, featuring a few familiar French actors (Claude Dauphin, Romain Bouquet, Laine, Sylvain Itkine and Léon Larive), was added with producer Roger Richebé involved. Some reference sources claim it was completed before the war started in 1939, but it was not officially released in Paris until April 1941, while the nation was being supervised by the Vichy government and Germany occupying. No doubt much of the confusion was deliberate as so many like Starevich were re-writing their own “histories” after the war, trying to disconnect any possible connections with Germany before or during the war.

Before getting into more history and influence, let me pause to get into the basic plot and cinematic elements of this production…

The storyline is quite episodic, being a collection of mini-stories that finally unify as a cohesive whole by the grand finale.

Among the various episodes: Reynard outwits a crow in the opening scenes (in a nod to Aesop’s earlier Greek tale); he then fools a wolf in some winter fishing (resulting in hunters fighting the wolf and he losing his tail in the process); outwits rabbits in a church setting (?!); during an official “vegetarian only” week, he tricks a bear into getting stuck in a well by pretending he is in “heaven” with the King Lion frequently getting his ambassador, a badger, to unsuccessfully negotiate with Reynard. Comedy is provided with musical interludes…and the queen Lioness is wooed by a Tom Cat (Jaime Plana providing the songs) behind her royal husband’s back, fitting in well with so many other French “cheating” stories for the cinema.

Eventually war breaks out between the Lion’s kingdom and Reynard, resulting in the fox almost getting hung for execution. The defense of the fox fortress involves plenty of juvenile antics by Reynard “Junior”, a pint size version of his daddy, getting the best of a battling rooster. Ultimately, there is a happy ending when our wily villain-hero is congratulated for his high intelligence and he gets promoted as royal minister!

With its close ups of very intricate puppets full of facial expression, along with larger mass scenes involving smaller figurines in action against painted backdrops, I guess some modern day viewers will see some resemblances between this and KING KONG, another famous stop-motion masterpiece of the same time period (if also including actual humans and not just puppets and, therefore, not often considered an “animated feature” by most film historians).

Both films make use of multi-glass and partially painted-on forest settings and feature furry characters in rather ape-like poses. We do have a monkey included here, but he serves mostly as narrator rather than a major participant in the action; his voice being provided by veteran actor Claude Dauphin…and his online filmographies inaccurately list this among his earliest works due to the questionable dating of 1930, a key year of animation production but not the year Dauphin contributed his voice since the soundtrack was completed for the French version sometime between 1939 and 1941.

Although this is the most famous adaptation of the medieval Reynard stories, it is certainly not the only one and…yeah…I must do some additional title dropping, starting with one of the most interesting of the bunch: Sarra Mokil and Alexander Ptushko’s LISA I VOLK (THE FOX AND THE WOLF) which adapts just the fox and wolf fishing sequence of the feature. Although shorter in length, it was also done in stop-motion animation and benefits greatly with the added novelty of full color, using a system Pavel Mershin developed that was much like Hollywood’s Technicolor. Even more intriguing is the fact that it was distributed by Mosfilm to Soviet theaters in April 1937, the very same month the feature debuted in Berlin! (You can watch an incomplete version of LISA I VOLK here: https://www.youtube.com/watch?v=c_fChjc5GQ0 )

Just as there had been both German and French versions of Starevich’s film, so too were later cel-animated TV adaptations made for French and German viewers, both taking many liberties from the original source and going off in different directions story-wise: MOI RENART (1985) and INSEGRIM IND REINEKE (1989), the latter a co-production with the great Shanghai studios in China. There was also a 2005 Luxembourg version done in CGI and an equally fascinating made-for-online viewing 2014 film featuring clever cut-out paper animation (which can be viewed here: https://www.youtube.com/watch?v=ZWlur0jdyT4 ).

Apparently Walt Disney was also interested in the Reynard tales with preliminary work done around the time that 101 DALMATIANS was still in production. Ultimately Walt favored doing another medieval tale, THE SWORD IN THE STONE, over these instead. However, many story ideas were later incorporated into one of the post-Disney features, ROBIN HOOD (1973), which had its own “Reynard Hood” as the lead character outwitting Prince John, another lion, much like the Starevich feature.

Getting back briefly to Ladislav Starevich’s career. Either due to the stress of getting this feature completed or just needing the rest after so many years of hard work, he would take a break from animation for several years, leaving the last of his puppy shorts, FÉTICHE PÈRE DE FAMILLE, unfinished in 1938. After the 1944 liberation, he briefly attempted a stab at Shakespeare’s A MIDSUMMER NIGHT’S DREAM, which later got made as a puppet stop-motion feature by the Czech master Jiri Trnka (whom we will cover shortly), and then completed his next project, ZANZABELLE A PARIS, in 1947. Six more puppet shorts were worked on before his death in 1965.

LE ROMAN DE RENARD remains today as one of those great curiosity pieces provoking quite a few unanswered questions. Why was it not officially distributed in the United States? Was this due to it possibly “tainted” with German money back in 1937 and U.S. distributors being leery of it when it became more accessible after the war? Or was the fact that it was made in black and white a bigger problem? After all, most cartoon subjects made in America by the 1940s were in color, including all of the stop-motion George Pal Puppetoons resembling it. Perhaps there were problems recording an English soundtrack, but I kinda doubt it.

Then again, it is rather macabre entertainment for most Americans. For example, many cartoons of the era depicted foxes seducing barnyard fowl to their doom but not in quite so much gruesome detail. A rooster brings the actual skeleton of his wife as “evidence” of the fox’s crime and cute chicks call out “mommy!”

In any case, most American animators and art fanatics had to seek it out in either 16mm form or bootleg video since only Europeans had access to it even as late as the 1990s. Among these was a much impressed Wes Anderson whose FANTASTIC MR. FOX (2009), based on a Roald Dahl book from 1970 instead of the medieval fables, paid homage to it with his own stop-motion and plenty of advanced-with-the-times cgi effects work. Too bad Criterion didn’t handle this one on DVD like they did the Anderson film.

Despite its age, it holds up surprisingly well and continues to fascinate with repeated viewings. Like the Jiri Trnka films we will cover next, it opens the door to the expansive imagination and creativity of cinematic story telling. I am sure the story tellers of Reynard over the centuries would have loved a Starevich visualization, presented in such a unique way.